Leslie Schneider
There are so many stories about talented people who saw a need and stepped in to help OfficeXpats at just the right moment. We couldn't have done this by ourselves. Part 2 is about a single, special gift from our community that kept us going at a crucial time...

A new coworker typically signs up because of benefits such as fast Internet and meeting rooms, and maybe even round-the-clock access to them. But talk to the ones who have been around for a while and it's often more about the community of professionals they've gotten to know, and the support they offered that mattered at just the right moment. In the coworking world, this phenomenon is sometimes referred to as "accelerated serendipity."

In the early days of OfficeXpats, we heard from many people about the difference this made to them. Living on an island as an independent professional was isolating. Some of those professionals have offered their talents and experience in our [email protected] classes over the years, or presented on Friday mornings at the Bainbridge Business Connection (the "other" BBC, for those in the know).

That phenomenon of accelerated serendipity worked its magic on OfficeXpats too!

Alyse McConnell, a "Transformational and Leadership Development Coach" is one of those professionals who inspired anyone she spent much time with, and many of us remember her "Looking Back - Looking Forward" end-of-year workshops at OfficeXpats for the Bainbridge Business Connection. Here is a snapshot of the BBC newsletter giving her a shout-out after 6 straight years! 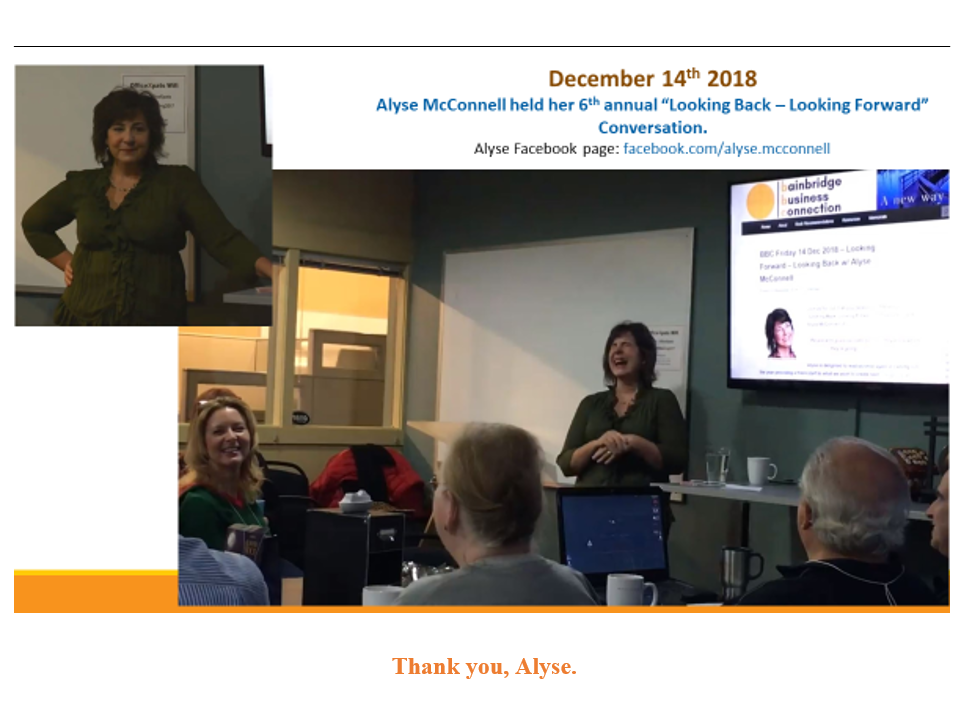 If my memory is correct, Alyse offered one of the very first "lunch and learns" that later turned into "[email protected]," and she also facilitated a Mastermind Group at OfficeXpats.

But there is another story that hasn't been told until now. I'm sure all partners in business hit walls around differences of opinion or power struggles.  Being partners in life as well as in business can be an advantage because there are so many "opportunities" to work on the deeper issues of normal conflict. I believe Jason and I do better than average at working things out in a productive way.

But we sometimes found ourselves floundering over how to manage aspects of the business, especially when neither of us had enough experience in that domain. I remember a long period of disagreement, more for the emotional strain than the details. One of the conflicts had something to do with how things were set up in our bookkeeping system; if we decided to do it differently, it wasn't going to be an easy fix. Somehow Alyse learned about our struggles. She said she would offer me her coaching help because she really believed in the need for coworking in our community.

What I remember as a turning point in that coaching was how Alyse got me to see that sometimes instead of fighting for what you believe, you have to just ask for what you want, as in asking for a gift. I needed to give up trying to justify why it was right that I should get it, and therefore "win." She used the metaphor of green M&Ms. "Just ask for green M&Ms because you need green M&Ms, not because green M&Ms are the right thing to do." It made me more humble about my asks and transformed the dynamics.

Yet another huge gift that kept us brave (and functional!) in the early years.